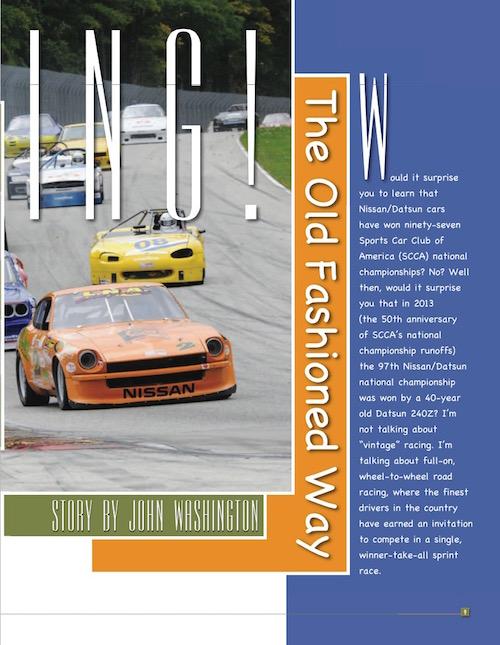  The 2013 E Production National Championship went to Greg Ira, a national championship many years later at Laguna Seca, CA, in 2014  fixture in the SCCA’s Southeast Division for many years. Greg is a Jacksonville, FL native, and 20-year resident of Plantation, FL. As a boy, Greg always loved cars. He built every scale-model car available. As for racing, Greg says, "My first memories of the track are rolling around in tires at Road Atlanta and going through huge puddles at Roebling Road, all with my Dad. In fact, the old scrap books have me aptly named 'Pig Pen'.” Greg's father Gordon Ira finished 3rd in the SCCA "Runoffs" in 1970 in a G Production Alfa Romeo Spider Veloce; and Greg's older brother Steve finished 4th in Formula V (FV) in 1988. Greg adds, "My dad had the first Datsun 240Z in Jacksonville. It must have had a manufacture date of 1969. It was silver and I believe it had a burgundy interior. It was beautiful. There was nothing like it back then. "I distinctly remember going on mini road trips with him, but we had four passengers. My older brother Stephen would ride up front and my brother and I would ride in the hatch area. We did- n’t care. We thought it was cool. You couldn’t get away with that these days, and to think of the exhaust fumes we must have been smelling back there, wow!" Greg's childhood best friend was Jason Gregg, son of famous Trans Am/IMSA driver Peter Gregg. In his career, Peter won an SCCA national championship; six IMSA GTO titles; four titles at the 24 Hours of Daytona; he owned Brumos Porsche; and won many victories in the red, white, and blue Brumos cars. Thus, Ira became ingrained in the culture of road racing during its American 'golden age,' and credits Peter Gregg, Peter's friend/co-driver Hurley Haywood, and his own father Gordon Ira as his inspirations. Greg is still friends with Haywood, Jason Gregg and his brother Simon. Greg’s first championship was in go-karts in 1989. Don’t laugh. If you've never driven a competition kart, you've never driven. How does zero-to-60 in 3-seconds sound, with your bottom 3-inches off the asphalt? Many of the best drivers in the world started in karts, where things happen really quickly and you learn to hone your reflexes to a fine edge. Most of the drivers who started in karts did so as very young kids. However, Greg first got a Bachelor of Science degree in building construction. “Amateur” racing is expen- sive, and you have to have a way to pay the bills! Moving “up” from karts, Greg proceeded to win an SCCA divi- sional championship in Formula Vee. Afterward he got involved in the newly formed class called Improved Touring, or IT. He had a street/autocross Z, and 240Zs were doing well in the ITS class at that time. Since Greg was intimately familiar with the Z platform, it was natural to go that route. While still in ITs, he tried an Acura Integra GSR, which also made a great platform for that class. That same car eventually won the Super Touring Light (STL) with Greg's brother Cliff behind the wheel and Greg doing setup. However, in the meantime while Greg was still running in ITs, the well-known Grayson Upchurch/Kemp Heuman E Production Z car went up for sale, as that team dissolved. Greg's team bought the car, which had been freshly wrecked in the 2004 Runoffs at Mid Ohio. After rebuilding the EP Z car, Greg began setting track records in the E Production class in 2006, including these storied tracks: Daytona International, FL, Heartland Park, KS, Homestead, FL, Palm Beach, FL, Road America, WI (Rain race), Sebring, FL, Virginia International, VA Not only has he set records, won races, and divisional titles, Greg gives back to the sport as a driving instructor for several racing organizations. He also does some driver development, builds engines, does expert chassis setup, and has been crew chief for other drivers. In recognition of his on-track success and his contributions to the sport, Greg was awarded the prestigious Kimberly Cup as the most accomplished SCCA National Driver in 2008. One of the most prestigious awards given each year, the Kimberly Cup is awarded by the SCCA’s Club Racing Board. This is the body that establishes the rules and standards for the organization. Past recipients of the Kimberly Cup include legends such as Bob Holbert, Roger Penske, Mark Donohue, and Peter Revson. The 240Z is still a great platform, but "competition adjust- ments" to the rules have made the car less competitive. Greg will retire the car after 2015 and pursue other racing avenues.

   SPONSORS     12 Z CAR CLUB MAGAZINE       • Starbrite Startron - www.starbrite.com • CU Yacht Charters- www.cuyachtcharters.com • Reaction Research - www.ZTrix.com • First Coast Auto - www.firstcoastautofinance.com • LNA Enterprises - www.LNAenterprises.com Greg's success has also won him modest contingency sponsorship (you get money if you win while using a company’s products and while displaying the company logo) to help defray expenses. Hoosier Tire is Greg's primary contingency sponsor, and he does some testing for them. Other contingency sponsors include Nissan, Sunoco, Electromotive, Hawk, and Summit Racing; and they generally pay down to 3rd place for a Majors race.     
      
 Q & A WITH GREG IRA

  John: What's the secret of your success?

Greg: Passion for the sport. Don’t ever underestimate the value of the driver. More power is seldom the answer. Pick a class and stick with it. Don’t keep changing if you plan to run up front. People take for granted the competitiveness of SCCA and often get dis- gruntled when they leave their current organization and come to SCCA where the rules are strict.

John: What advice would you offer a young driver?

Greg: Climb the ladder. Learn how to wrench. “Take what the car will give you” is one of my favorite thoughts. I learned this in a ProVee race a long time ago. It means if you’re on the track, get going and haul. Don’t screw around. If you are at the limits of the car, you’ll be much better at learning the hardest part, how does my car really handle and how can I change that?

John: And for the Walter Mitty crowd, what's your advice to older drivers?

Greg: Keep after it. If you once had the passion, you more than likely still do. Sometimes life comes before racing, but the passion doesn't leave. Racing is my “golf” and I don’t plan to quit until I can’t see anymore.

John: Are you going to continue competing toward future SCCA national championship efforts?

Greg: Yes, for 2015 very much. I am currently working on aspects of the car we haven’t worked on in awhile. People will come out of the woodwork for this one in Daytona, believe me. It rewards cer- tain types of cars and ours used to be fast there. I wouldn't doubt if my Daytona track record is broken by 2-3 seconds. Before that we will run 6 Major races. We will continue to test the 2.6-liter engine vs. the 2.4 trim. So far, we still believe in the 2.4 trim for this car. Getting the car down to weight [to enhance competitive- ness] is a real challenge. The target is 2150 lbs with the driver.

Greg: I enjoy free diving, lobster hunting, fishing, boating, bird hunting, and traveling with my wife Ami. We are DINKS, so our freedom is used to the hilt. Ami owns her own business in the yachting industry and keeps very busy with that. I love to work on racecars and develop customer cars. So far, the car’s I have built/assembled have done very well in competition.

John: What is your day job?

Greg: I work for a company called Engineered Endeavors as the national sales manager for the wireless division. We provide struc- tural steel to the wireless telecom industry in the form of stand- alone tapered steel monopoles. These are very efficient, non-obtru- sive structures that most folks don’ t notice. It’ s just a miracle their cell phone works like magic.

John: Is there anyone to whom you'd like to offer special thanks for their assistance?

Greg: Absolutely! Doing what our team has done is very, very hard. Several people have been instrumental in this, mainly Guy Marvin IV and Sam Neave. Guy is my childhood friend and had always been there heading up the team. Sam Neave, owner of LNA Enterprises, has been the main ingredient for helping us go fast. His engine and chassis knowledge is unparalleled. Cliff Ira [Greg's brother] and Tim Carey have also been very helpful in the ownership and crew side of the team. Hoosier Tires has been the best tire company by-far and have been very helpful to my team as well as my brother, Cliff’s team. I believe Hoosier puts out such good tires because they care about what they do. They really do have the best tires out there and the most support both at the track and in the R&D department. They support Club racing just as much as Pro racing.