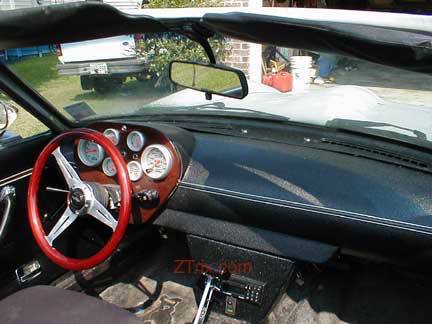 Please note that these instructions come to me courtesy of Paul Young, a Velo Rossa™ builder in Redding California. I purchased the mold for the “Simpson Dash” from Jim Simpson, formerly of Rhino Blue Ray GTO replica fame. Jim never had any instructions for his dash and I have not had time to do a detailed set either.

Paul’s donor car is a 1972 240Z. If your donor is a later model car, your installation will be slightly different. However, you can still get a very good idea of what is required from reading these instructions. Read through them completely before beginning your installation, and read them again before you cut anything.

You may also come up with other ideas that are anywhere from slightly to significantly different than the installation Paul did. If so, and if something works particularly well for you, please let me know and I will include that information (with a credit to you, of course) in future versions of these instructions!

1.Obviously, the first step in installing a complete replacement dash is to remove the old dash! Since my donor car didn’t have a dash when I got it, I didn’t have to do this, but I imagine that if you follow the instructions in the Haynes manual you shouldn’t have too many problems. Don’t throw ANYTHING  away yet! Here’s what the car looks like with everything removed.There are six mountings visible in this picture, and they’re 6mm, 1.0 threads. I chased the threads with a tap before I went any further.

2.I held the dash up against the body, centered in the space and marked the locations of the six mounting holes on the rear lip of the dash. I drilled ¼” thru holes at the six locations. Here’s a look at the dash with the first set of tabs installed.3.Next I cut six pieces of 1” wide x 1/8” thick aluminum, 1.5” long. I drilled and tapped 6mm 1.0 threads into one end and drilled a ¼” thru hole at the other end. The centers of both holes are ¼” in from the end. Using 6mm-1.0 x 20 mm hex head bolts with fender washers and lock washers (to spread the load across a larger area of the fiberglass), I attached the brackets to the dash, with the thru holes sticking up above the dash. I didn’t tighten the bolts yet.

4.I mounted the six brackets to the dash, again using 6mm-1.0 x 20 mm hex head bolts. Since the first set of bolts weren’t tight, I could move the dash around slightly so I could get all the bolts started in the holes in the car body.

5.When I had all the bolts tightened, I decided that the angle of the dash was wrong, and that it was “looking up into the air”, so I decided to change the angle. I milled a piece of aluminum with a 15 degree angle, drilled ¼” thru holes in the part that was still parallel, and drilled and tapped 6mm-1.0 thru holes into the angled part. These could just as easily have been made by bending some steel bar and drilling and tapping it. There’s no magic about the parts being 6061-T6 aluminum. The base stock was 1-1/2 x ½” rectangular bar, I milled the base thickness to 7/16” and cut the parts off at 5/8” width.

Photograph of the new mounting tabs as milled, before I cut them into separate pieces.

6.These four pieces replaced the four center mountings on the dash. The two outer ones are the original straight pieces I tried initially.

7.Once the dash was in place, I noted that the steering column touched the bottom of the dash at the rear, so I cut out a section that is 3” wide at the back, 2” wide at the front and 4” deep from the rear. I used an air body saw to make the cuts as it has a very small blade so it’s easy to turn it in the corners. If you don’t have a body saw I’d recommend drilling holes in the dash then cutting to the holes. I finished off with a file to smooth the cut edges. This is a shot of the cutout in the lower part of the dash, below the steering column.8.I made lower mounting brackets that attach to the brackets on the body where the dashboard vent handles used to be (I’m adding aftermarket A/C to this car). These brackets are 1 x 3/16” thick steel and are attached to the lower part of the dashboard with ¼”-20 stainless steel button head screws. These two pieces had to be bent to match the relative locations of the dash and the existing mounting brackets. They’ll be glass beaded and painted soon.

9.I also decided that the instrument cowl was too long, and I wouldn’t be able to get the steering wheel on the splines on the column! So, I marked the cowl with masking tape and cut off the excess fiberglass. As can be seen in this photo, I cut the cowl on an angle. I think I actually cut too much off – if I was going to do it again, I would have removed less material. Before cutting the cowl After cutting the cowl

10.Next step was to make the instrument panel blank, which is simply hand-cut and filed from 0.060” aluminum – the fiberglass piece supplied with the dash wouldn’t fit after I cut the cowl.

Next I needed to determine where the instruments were going to go, so I made paper circles and stuck them on the panel. I put the driver’s seat and steering wheel into the car and moved the paper blanks around until I could see most of the paper through the wheel. This determined where the blank was drilled. 12.It was at this point that I decided I would like to have an engine-turned instrument panel. I tried doing it the old-fashioned way with a hardwood dowel and valve grinding compound, then I tried a kit from The Eastwood Company, and I discovered that this process is:

c.Results are VERY dependent on the amount of pressure that is applied to the abrasive and also the time the abrasive is held in contact with the metal

d.It’s also very important to clean and dress the end of the abrasive roll every three or four times it’s used.

So, I contacted a company called FPM (found them on the WWWeb) and purchased a 12x24” piece of .060” thick, ¾” CNC-turned aluminum sheet and made a new instrument panel from it. I also made switch plates and have enough left over that I can make a surround for the shifter when the transmission and console go into the car.

13.I had to make mountings for the dash panel, so I bent up some 20-gauge steel and bonded the pieces into the dash with fiberglass mat and resin, and allowed this to setup overnight. I marked and drilled mounting holes and used “Riv-Nuts” (sort of pop rivets with threads) to anchor the instrument panel into the cowl. The small gaps around the instrument panel will be filled with body filler and everything smoothed and rounded at some future date.  This view shows the mounting tabs, covered in rubber to minimize rubbing.

 Here’s a look at two of the mounting bolts

14.The factory cowl piece (inside the windshield, on top of the dash) is designed to fit the factory dash, and doesn’t have a bump in it to go over the instrument cowl, so I installed the windshield rubber with masking tape ( the cowl sits on top of the rubber), screwed the cowl to the dash with sheet metal screws, marked the edges of the instrument hump on the cowl, removed the cowl, made cuts at the marks with the plasma cutter, put it back on the car, bent the cowl to match the contour of the dash and tack welded it. I removed it from the car and closed up the slots I had cut with the MIG welder and sanded the weld flush with the base metal. I then cut slots in the dash for the defroster vents, and mounted the factory plastic vents to the bottom of the dash. I bent up mounting tabs for the cowl and screwed them to the top of the dashboard, then attached the cowl to the tabs with Phillips-head screws. First cuts around the instrument cowl

I’m planning to sand and paint the dash in the same black wrinkle finish Datsun used for the cowl piece, and I think the shiny engine turned aluminum, together with the custom knobs I turned on the lathe for the switches should look good against the matt sheen of the wrinkle finish. [Note, I recommend “dash texture paint” from an auto paint supply. The texture is still ‘bumpy’ enough to help hide surface imperfections and make the surface look interesting. However, it won’t pull lint off your dash cleaning cloth like wrinkle paint will. JW]